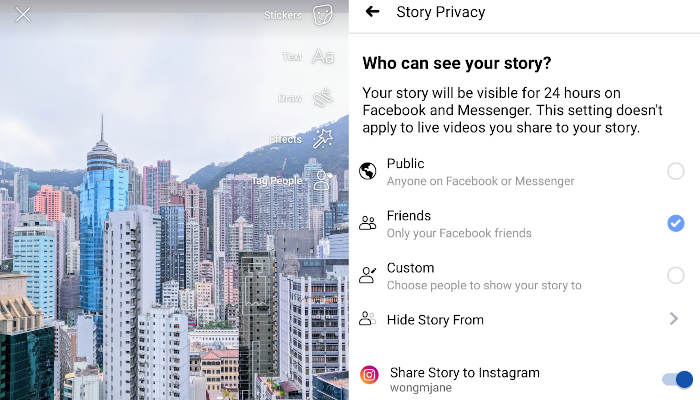 Stories – that is the format of the time, and although Snapchat can be considered the platform that introduced it, Instagram, in particular, has its enormous popularity thanks to this feature. Therefore, the social network has also adopted the stories for the Facebook platform itself and WhatsApp; and generated over 500 million daily active users for it. In 2017, the company then launched Instagram Stories cross-posting on Facebook, which should have contributed to this success. Now the option is also tested in reverse.

Cross-posting allows users – including brand and company accounts – to share their story content with the possibly different follower groups on Facebook and Instagram. This means that the content is not only shown potentially more but also more to different users. This is a relevant factor for visibility in social media.

The option of cross-posting from Instagram to Facebook was, therefore, very much welcomed by many Instagramers. So it is rather surprising that Facebook is only now testing the reverse variant. Reverse engineering expert Jane Manchun Wong became aware of this. She shared a corresponding tweet. This shows a Facebook story that will be visible on the platform and in Messenger. In addition to the option of making this story visible to a specific audience, such as friends or the entire public, there is also a button that allows the story to be shared on Instagram.

A Facebook spokesman told TechCrunch that the feature on the platform was officially in the test phase. Accordingly, the option is no longer a pure prototype but is being tested with users in everyday social media life. Since Jane Manchun Wong very often discovers tests for features that will subsequently be rolled out, Facebook users can probably expect that the cross-posting of the stories will be available to everyone shortly. However, there is not yet a specific period for this.

Cross-posting also works with WhatsApp. The status can be shared, for example, in the Facebook story. Facebook also tested a function in 2018 to bring Instagram Stories directly to WhatsApp.

All the options for sharing stories ensure that users distribute their content on as many platforms of the Facebook universe as possible – and thus increase the length of time the viewer stays. Account operators and Facebook can benefit from this. As TechCrunch Josh Constine emphasizes, it would be desirable for the viewer if the data from Instagram and Facebook were synchronized to the stories viewed so that the content posted on both platforms is not always shown to a user twice. Until then, the stories on Instagram and Facebook could be displayed as new, and the more views they get, the better for the creators.